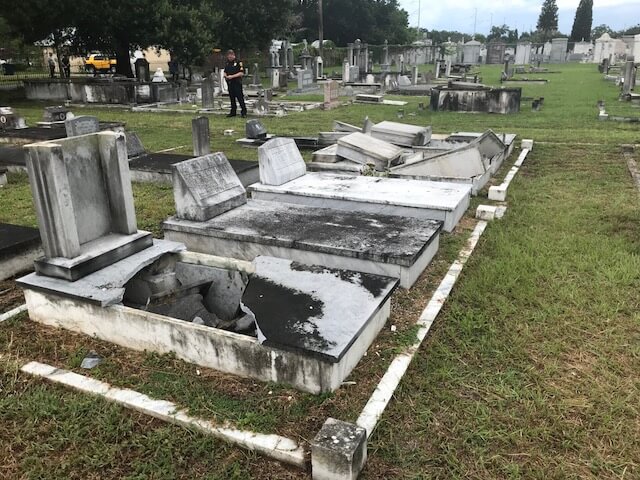 Friends, today we learned that our ancestral cemetery in Tampa has been vandalized by unknown persons. This despicable act is being investigated by the Tampa Police Department. As part of our efforts to inform the public of this desecration we have issued the following press release. We will be sure to keep in touch in the coming days and weeks.

TAMPA – It was reported to the Tampa Police Department today that at least 18 grave sites were desecrated by vandals at the Centro Español Cemetery on 21st Avenue between 25th and 26th Streets.

The Centro Español of Tampa, which owns and maintains the historic cemetery, is currently in the design and development phase of a Capital Improvement Project for the cemetery. Centro President John A. Rañon indicated that despite this setback, the organization’s goals to restore, beautify, and better secure the cemetery will move forward as planned, saying “This appalling act of vandalism will not deter our mission.” The Capital Improvement project has been recently bolstered by the Centro securing the Historic Preservation Grant from the Hillsborough County Economic Development Department.

In concert with their established plans, the Centro will, as quickly as possible, begin the process of identifying the deceased whose resting places were disturbed and to subsequently notify the families affected. Please find information regarding this process on our website at centroespanoltampa.org, or on social media at facebook.com/centroespanoltampa.

Any parties with questions regarding the specific sites affected can contact the organization by email at info@centroespanoltampa.org or by phone at 813.870.0559. For those wishing to make a contribution to the Centro to support the restoration process, donations can be made at centroespanoltampa.org/support-our-mission or by phone at 813.870.0559. Any information about the crime can be reported to the Tampa Police Department’s Non-Emergency number at (813) 231-6130. 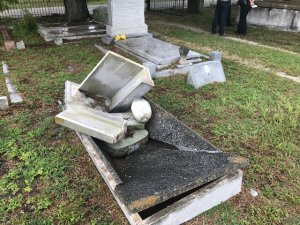 About Centro Español
The Centro Español of Tampa is the oldest ethnic social club/mutual aid society in Tampa and one of the oldest in the United States.  The institution was incorporated by the State of Florida in December, 1891, and has been active in the community ever since.  Founded by immigrants from Spain who came to Tampa during and after the formative years of the cigar industry, the club grew and prospered for six decades; at one time, the Centro had thousands of members.  Today, the descendants of Centro Español’s founders seek to preserve, honor, and celebrate its legacy while continuing to serve the Spanish colony and all of Tampa.