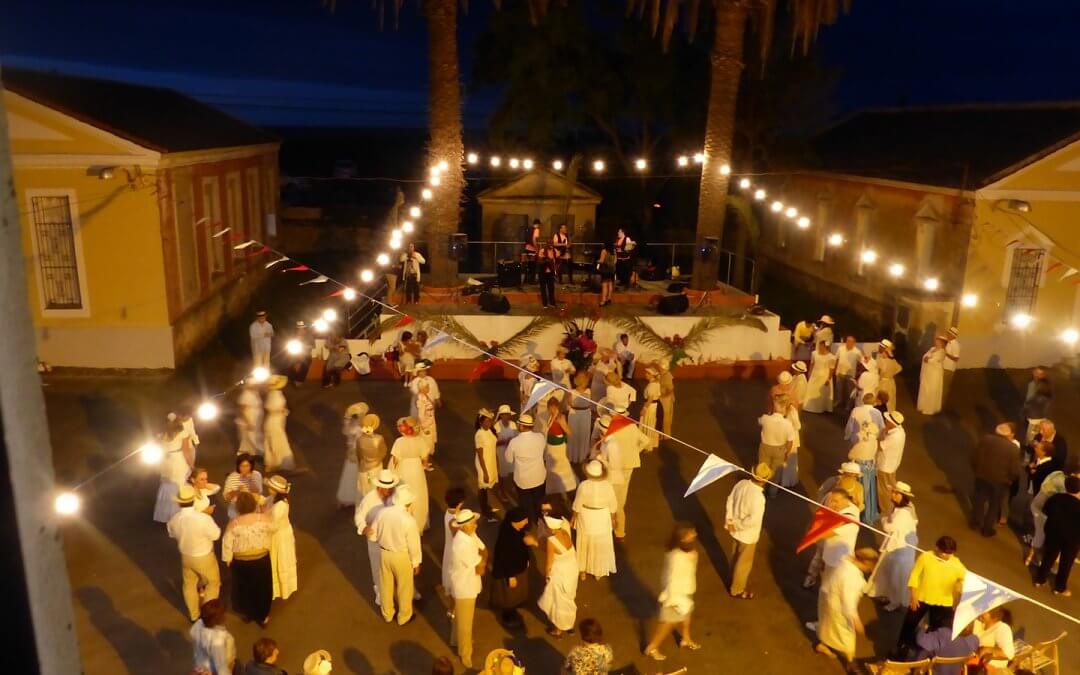 Our nation has grown accustomed to an on-going discussion and debate about immigration.  Emotions are raw, perspectives skewed by personal experience and background.  Yet, despite the rancor, we continue to celebrate the mere act of becoming a citizen.  Imagine however, a celebration of a different sort, a celebration where the celebrants commemorate a phenomenon where some emigrants return to the old country enriched by the bounty they earned in the new one.  Such a celebration exists in a small provincial town in the region of Galicia, Spain. 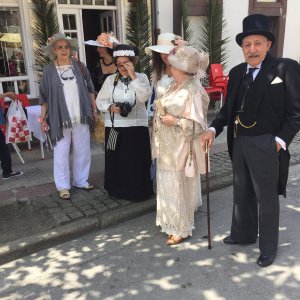 The region is significant to Tampa’s history as it yielded thousands of immigrants who departed Spain for the Americas in the late 19th and early 20th centuries.  The name of the town is Ribadeo, population 10,000, and it happens to lie on the border of another region of significance to Tampa: Asturias.  Taken together, Galicia and Asturias yielded the bulk of the Spaniards that came to Tampa looking for a better life and work in the once fledgling and ultimately impactful cigar industry.

The festival called “Ribadeo Indiano” has been held the second week in July for the last three years.  It commemorates the departure and the return of a small portion of the emigrants who departed.  The term “Indiano” signifies that the departed citizens traveled to the “Indies”, an all-inclusive reference to the Americas and a reminder of Columbus’ error in proclaiming to Europe that he had discovered India.  The festival runs for three days, Friday to Sunday, and features a number of themes, the most striking of which is the practice by locals of adopting the attire of what was typical of returning citizens in the 1920s and 1930s, which is to say, dress that was prevalent in the Caribbean, particularly Cuba, and other nations of Central and South America.    The degree to which this has been embraced is striking as the accompanying photos attest.  Many husbands and wives, their children, and young adults don the striking apparel – an abundance of white dresses, guayaberas, pants, hats, formal attire, and a sprinkling of white parasols – the women are beautiful, the men handsome, the children adorable.  It is a monochromatic feast for the eyes. 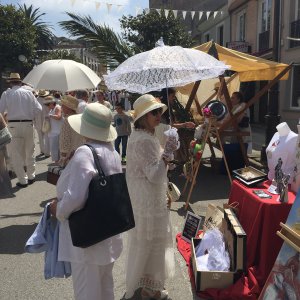 Of course, the festival offers other features, including recognition of the eventual influences that the exodus brought forth to the culture, such as music, food, and architecture.  All meld into an impressive and joyous whole where the local population and visitors alike partake in the festivities that require only the ability to stroll through quaint streets and parks.  Ample opportunities exist to sample the famed seafood and other staples of the increasingly appreciated cuisine of Galicia, as well as the wines of the region and the rest of Spain.  Also of note is the emphasis provided to the cultural legacy of the migration.  Each year, several sessions are devoted to the historical aspects of the movement to the Americas.  Although much of the emigration to the Americas was to Cuba and Central and South America, there was a lesser, but still significant migration to the United States.  For the festival held this past July, this interest in the past had a decidedly Tampa connection, which much influenced me and two of my friends, Anthony Carreño and Bill Wear to travel to Ribadeo. 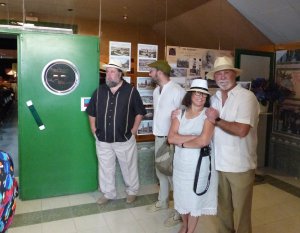 LtoR: Jim Fernandez, Luis Argeo, Laura Goyanes, Anthony Carreño in the Foyer of the Theater Where “A Legacy of Smoke” was Screened, Ribadeo, Galicia

This is how our story unfolded.  Two years ago, the venerable Centro Español of Tampa, which was founded by Spanish immigrants in Tampa in 1891, sponsored the premiere of a short non-fiction film about the Spanish colony in Tampa and how it was influenced by the cigar industry.  “A Legacy of Smoke”, produced by NYU professor James Fernandez and Spanish film maker Luis Argeo, was shown once at the Tampa Theatre in November, 2014.  The film offers three vignettes featuring four Tampeños: Elba Ruilova, a hundred years young and still giving piano lessons; Cathy Varon, who discovered her Spanish roots after her mother passed away; and Jose Oural and my late father, Angel Rañon, who reminisced about the old days while viewing home movies from the 1930s and shared a small glimpse into their project of recording the nicknames of Tampeños who were their contemporaries.  Fast forward to earlier this year and an invitation received by the film producers to screen their movie at the Ribadeo Indiano festival.

It was not surprising that such an invitation was extended because the research being undertaken by Professor Fernandez and Sr. Argeo about Spanish immigration to the United States is becoming well known, not only in U.S. and Spanish academic circles, but among groups in both countries interested in the story of Spanish immigration to the Americas and specifically, the U.S., a story that is not as nearly well-known and documented as the stories of the Irish and Italians, among others.  The fruits of their labors can be found in the Facebook page “Spanish Immigrants in the United States”, in the website “Traces of Spain in the United States”, and in the recently published book “Invisible Immigrants”. 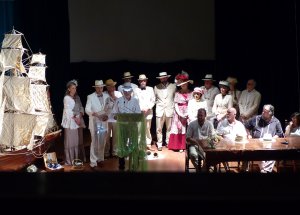 John Rañon Speaking Before the Screening of the film “A Legacy of Smoke”, Ribadeo, Galicia

The prospects of screening the film in Ribadeo was an exciting development, not only because the Centro Español of Tampa was one of the sponsors of the film, but because both of my parents were born in a village a very short distance from there.  What’s more, we learned from the organizers that the film was not only going to be screened in Ribadeo, but also in the village of my parent’s birth.  Plans were put in place and in the first week of July, Anthony, Bill, and I traveled to Ribadeo where we met up with Professor Fernandez, Sr. Argeo, and Laura Goyanes, the latter a descendant of Spanish immigrants to the U.S. and a contributor to the research being undertaken.  On the day prior to the screening, we were privileged to meet the mayor of Ribadeo and the festival’s principal organizer, who happened to be a distant cousin.  In our conversations, it was confirmed that the film makers, as well as Anthony, Laura, and I, would be part of a panel that would receive questions after the film ended.  Then, at the last minute before the first screening, the mayor, taken by the story of my family’s emigration, which I had summarized in our meeting of the day before, asked me to make a few introductory remarks, which I was happy to do.

John Rañon and Anthony Carreño Conversing During the Panel Discussion After the Film, Ribadeo, galicia

Judging from the muted response from the audience during the question and answer period after the first screening, it was a little difficult to discern how the movie was received.  This is not surprising given its form and content, which is not a documentary in the traditional sense, but more like a personal statement about the legacy of an immigrant community some one hundred and thirty years after it was established.    Another possible factor in the muted response is that some of the home movies that were part of the film dealt with the response of Tampa Spaniards to the Spanish Civil War, a conflict that is still a touchy subject in Spain some 75 years after its conclusion.

What was not muted, at least for me, was the joy and pleasure of having a good many of my Spanish family members present for the screening in Ribadeo, many of whom live near there and most of whom I had not seen in 38 years.  This happy family reunion was repeated two days later in La Devesa, the birthplace of my parents and many other members of my family.  In La Devesa, the film was screened in one of three buildings that form the Circulo Habanero, an example and remnant of the returning Indiano phenomenon.  The reaction to the movie was similar to the first screening, but in this case, another reason for the muted response is that the assembled multitude knew that after the film was over, there would soon be dancing to the music of a local Cuban style salsa band.  For the traveling Tampeños, it was perhaps the fitting coda to a memorable weekend: a final commemoration of the past followed by a vivid reminder of a musical influence of that past that resonates today in Galicia just as is does in Tampa.